Olive oil is indisputably one of the great natural elixirs of the earth. Described by Homer as ‘liquid gold’ in The Odyssey, coined ‘the great healer’ by Hippocrates, the benefits of the substance have been enjoyed by people for millennia. Its historical purposes have expanded across the food, cosmetic, pharmaceutical and fuel industries.

Used topically, olive oil can be wondrous for the epidermis and our new range of olive oil skincare is a glistening example of its cosmetic capabilities. In celebration of the new collection, Cleo is delving deep into the past to explore the surprising and enduring history of olive oil, before recognising its astonishing benefits just waiting for you to discover!

The olive tree, known as Olea Europaea, originated some 40 million years ago in the Mediterranean basin, fossil evidence suggests. Their domestication came almost in tandem with the development of civilisation and whilst its first origin is unknown, the cultivation of the olive tree is one of the earliest in the history of human agriculture. The oil is essentially the fruit juice of olives and its unique consistency and capabilities are most likely what attracted communities to cultivate its trees.

The earliest archaeological evidence of the production of olive oil dates back to around 6000BC in a prehistoric settlement in Israel now submerged under the ocean. Evidence found includes written tablets, olive pits and wood fragments. Other information gathered shows a similar level of cultivation across Syria, Palestine and Lebanon. The Asian states, specifically the Phoenician civilisation are those responsible for the spread of cultivating practices to Western civilisation.

The Phoenicians began trading with other maritime centres and distributed the cultivation techniques to Greece, who were the first to acknowledge its potential for capitalisation some 3,000 years later. Olive trees began to be commercially grown in Crete and the surrounding Aegean islands. Olive oil became a principal product for the native Minoan civilisation and indeed a great source of wealth, with a particularly healthy export relation with Egypt. Ancient jugs used to transport the substance (and with oil still contained inside) have been discovered in Egyptian tombs that have remained intact for over 4,000 years.

The Minoans placed great value in the substance. It was used in many religious ceremonies, medicines, fuel (such as for oil lamps), soap-making and skincare. Ancient Greeks would smear their bodies and hair in olive oil both to promote health and for grooming. It was particularly popular amongst the elite societies; kings and athletes were anointed with the substance and it was burnt in sacred lamps to represent the 'eternal flame' of the Olympic games. Athletes used it in the gymnasia as an aid of exercise.

Olive oil and its trees were also highly symbolic in Greek mythology. The olive tree was the main symbol of Athena, the goddess of wisdom. In the founding myth of Athens, Athena bested Poseidon (God of the sea) in a battle for patronage of the city by creating the first olive tree. The bountiful collection of olive trees in the area led to the city being named in her honour and she became the patron goddess of the city for the gift.

The Romans later discovered olive trees through their contact with the Greeks, who subsequently dispersed it through their colonies, which led to its popularisation. The olive was considered the Queen of the Trees. Olive oil became increasingly important not just as a staple food within the Mediterranean diet, but as a pharmaceutical and energy source.

The improvement of trade through the centuries led to the proliferation of olive oil around the world and inspired greater research into its wide capabilities. In the early 1500s, early settlers and missionaries to America introduced the cultivation of olive trees and its many purposes who popularised olive oil to global level it stands at today. 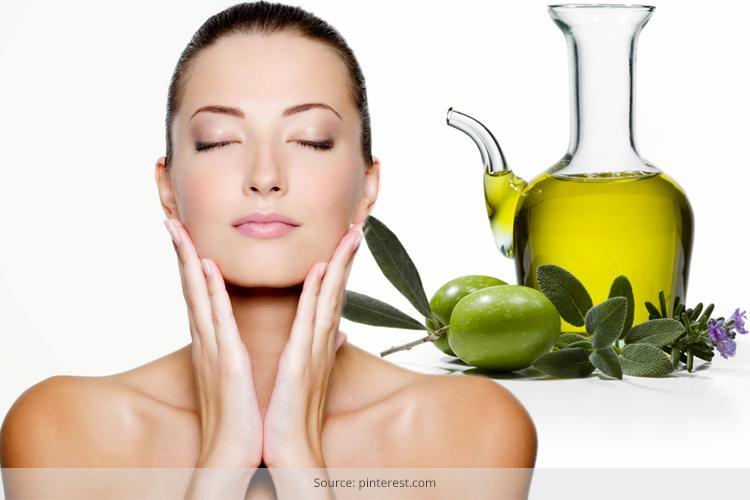 Far from being a staple ingredient in the world of cuisine, olive oil can have incredible benefits for the epidermis. Here are Cleo’s top 5 olive oil advantages!

Olive oil contains three major antioxidants: vitamin E, polyphenols and phytosterols. These antioxidants work to leave the skin clear and leave a film around the epidermis which protects against ultraviolet radiation, the key contributor to signs of ageing. Olive oil also prevents free radical damage for an overall cleaner complexion.

Unlike most moisturisers which clog the epidermis during their absorption, olive oil deeply penetrates the skin whilst simultaneously clearing the pores of any impurities. It operates as both a deep-rooted moisturiser and a cleanser.

Olive oil is a fantastic accompaniment to exfoliation. Due to its pore-cleansing and moisturising capabilities, it assists in the removal of dead skin cells and works alongside the abrasive techniques of exfoliation to leave a clear and smooth complexion.

Olive oil is a natural remedy in brightening the complexion. Used in a daily moisturiser, it helps to add a natural glow to the complexion due to its oily consistence without inducing acne. It is naturally high in squalene which mimics your skin's natural sebum for a natural, healthy glow.

Olive oil is a natural combatant to symptoms of dry, itchy or inflamed skin whether as a condition or induced by shaving. Not only does it reduce the appearance of redness, but due to a compound called oleocanthal, it can actively soothe symptoms of inflammation.

So don’t wait! Take advantage of these great benefits for yourself with our new olive oil range, available here.